My Review of I Love to Tell the Story

Even though I grew up in a Southern Californian Pentecostal church in the 90s, and Susan grew up in a Midwestern Baptist church in the 70s, I had to chuckle at some of the stories she shared.  I identified with that “one of these things is not like the others” feeling among church “friends.”  (Still do sometimes!  I’m a pretty odd duck.)  I loved the hymns that opened each chapter and were woven into her own story, even though I only knew about half of them.  (They reminded me of Aggie’s habit of belting hymns, even though Susan isn’t a belter.)  Some parts of this story were laugh-out-loud funny.  Susan did a great job of relating “church” through the eyes of a child.  It really was a stroll down memory lane!

Other times, I had a hard time figuring out the direction the book was taking.

It felt like a bunch of experiences strung together, and I didn’t really get the organization of it or how it fit until the end (and even then I wasn’t sure).  That may just be a personal preference thing. I haven’t read a lot of memoirs, but this one felt a little disjointed to me.

I will admit, though, that I got a little teary at the end.  In a good way.  At the end of this story about what it was like to grow up in church, I am encouraged.  See, I’m an outsider too.  A lot like Susan in that regard.  Like I said (like she said), one of these things is not like the others.  But like Susan was surprised enough to almost drop the baby at the end of the story, to learn she had influenced someone else (and maybe a few someone elses)…maybe I’m having an impact too.

I Love to Tell the Story is on Tour with Celebrate Lit!

Book: I Love to Tell the Story 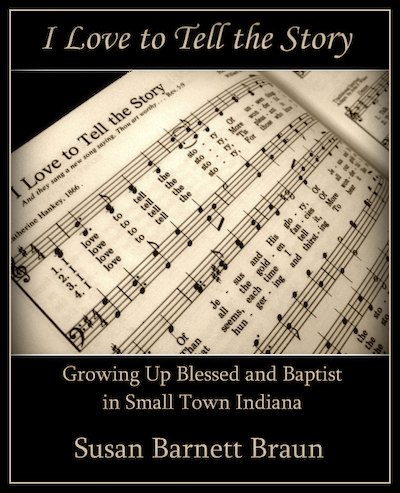 Is it possible to emerge unscathed from an evangelical upbringing? Yes, as surely as David slew Goliath!
I Love to Tell the Story is Susan Barnett Braun’s account of growing up Baptist in a small midwestern town, touching on many cultural icons common to those who came of age in the 1970s. Braun recounts childhood obstacles, which loom as large as the walls of Jericho in her eyes. She encounters a trio of Sunday school mean girls who make King Herod look tame. She worries about being “ugly as sin” due to her chubbiness, glasses, and braces. She’s so consumed with the idea of Jesus’ imminent return that she wonders whether it’s even worthwhile to brush her teeth at night.
Humorous, poignant, and ultimately triumphant, I Love to Tell the Story will stay with readers long after the last Vacation Bible School craft stick cross has fallen apart.

Susan Barnett Braun earned a BS in retail management from Indiana University and an MA in education from the University of Alabama. She taught for eight years in northeast Indiana, earning a Lilly Endowment Teacher Creativity Fellowship and a National Endowment for the Humanities Summer Study Scholarship. Susan has had work published in Parents, Children’s Ministry, and The Secret Place. She also writes online for Fort Wayne Visitor’s Bureau and blogs at Girls in White Dresses. She is married with three wonderful young adult daughters. Susan enjoys reading, playing piano and organ, and spending her time with her family and pets (currently three rabbits and a chinchilla).

One of the reasons I began blogging, ten years ago now, was to document my childhood memories for my kids. Why? When I was a teacher, before I had kids, I used to tell my students stories from my youth. They loved them and begged for more. Same thing when I had my own kids. I wanted to document these tales, but the problem always came in finding the time and the motivation to actually get around to writing them down.

Childhood Memories Friday posts on my blog helped get me moving in the right direction. Eventually, I began thinking I’d like to compile a bunch of the memories into book form. Since many of my most vivid memories revolved around church, I decided that that was the perfect theme. And “I Love to Tell the Story” was born. Each chapter is titled with a hymn that reflects its theme. As I delved into the writing, I had a lot of fun reliving the decidedly memorable life I had led as a youth :). I realized, too, that many aspects of my conservative midwestern upbringing don’t exist anymore in the 21st century. I became nostalgic thinking about the many cultural markers of the 1970s — Lawrence Welk, the Flintstones, — even macrame and latch-hook!

Another goal in writing this book was to put out a positive Christian memoir. So many that I read started out fine, but then dissolved into abuse, disillusionment, or even worse. I began to wonder if anyone had grown up in the church and actually enjoyed the experience … surely I wasn’t alone, was I?

Treat yourself to a stroll down memory lane. It’s my hope that you’ll enjoy yourself.

The Power of Words, March 8

Spoken from the Heart, March 9

Previous Post: « 7 Ways Entrepreneurs Can Be More Productive Each Day
Next Post: What happens when you combine history with fiction? »