Can I just say that Chautona Havig has a special gift? It seems like every book she writes has the funniest premise you could think of.  Thirty Days Hath… is no exception. Adric’s friends have decided that it’s time for him to get married. Actually, he wants to get married at some point, too. But he just doesn’t have time to date and find the right girl. So they set up this scheme that seems like a cross between the bachelor and…I don’t know. It’s not like a sketchy scheme either. Twelve women each spend a month living in Adric’s house, with a chaperone, and basically auditioning for the role of Adric’s girl. And of course, he is really auditioning with them too.
This post was originally shared on the Real World Bible Study
This page contains affiliate links – they don’t cost you a penny, but they sure help to pay off those student loans!  For more information, please see my disclosure page.  Also, I received a review copy of this book. All opinions are my own.

I don’t have time to date, either. Maybe I should have Chautona fix me up too.

This book was so, so, funny. Chautona never disappoints. Everything you should consider when trying to decide who to date, and who to marry, seems to show up in this book. Some of the women are delightful. Some of them are absurd. And some of them are absolutely loony. Actually, that’s a lot like real life. (I’m a magnet for loony.) And Adric himself grows so much during the story too. I can honestly say that I was surprised by who he ended up with. One point, I wasn’t sure he was going to end up with anybody at all. Wouldn’t that have been a story.

The dating scene is always been something that’s a little weird to me.

People go on dates, sometimes states that don’t even allow you to get to know each other (like going into the going to the movies?!). They don’t usually put their most normal, natural, authentic self form. Of course. They want to put their best foot forward. That’s understandable. But so many people never experience what real life is like with the person they’re dating.
Some cultures try the arranged marriage thing. (I guess that would work if you don’t have time to date.)  And it seems to have some success, perhaps because people are so committed to the process. But I think most of us would want to get to know someone first. I’ve always thought I’d rather just be friends with someone and then get married. But Adric’s sister and brother-in-law seem to find the cross between the two. It’s not an arranged marriage. It is arranged dating, and almost practice marriage without the sketchy living-together-sleeping-together stuff that we don’t do as Christians. I think it’s kind of neat that you get to see what someone’s really like, even what they live like when the makeup comes off.  If it ever comes off.
I would recommend Thirty Days Hath… to anyone who enjoys a lot of laughter, who likes to stay up all night trying to find the end only to feel realize that you’re only on chapter 6. If you enjoy a little bit of romance and a little bit of tough stuff and a whole lot of fun you’ll enjoy this book (along with everything else that Chautona has written.).

Thirty Days Hath... is on Tour with Celebrate Lit

Blind Dates Are for Wimps!

At least, that’s what Adric Garrison thinks.
Can you blame him? Thanks to his sister and brother-in-law, Adric is about to embark on a year of month-long, chaperoned, blind dates. Awkward.

He didn’t ask for it. But Adric still finds himself living what seems more like a bad TV reality show than a new life in Fairbury.

Once an ordinary (if prematurely gray and vertically challenged) guy, Adric is now Fairbury’s newest “most eligible bachelor,” and dreams of permanent bachelorhood loom on the horizon. Will he call it quits before the year is out, or will one of his “girls of the month” change his mind?

One man, twelve women, one happily ever after.

Chautona Havig lives in an oxymoron, escapes into imaginary worlds that look startlingly similar to ours and writes the stories that emerge. An irrepressible optimist, Chautona sees everything through a kaleidoscope of It’s a Wonderful Life sprinkled with fairy tales. Find her on the web and say howdy—if you can remember how to spell her name.

A SILENT TRUTH NO ONE ADMITS: BLIND DATES ARE FOR WIMPS

Maybe I’m not the one to talk. After all, I never dated. Not really. My best friend in high school was a guy. We went to the movies. We did things. Still, we were just great friends.

I had what might be considered one date in Lubbock, Texas in 1987. Maybe. I didn’t consider it one, but I suppose the guy might have. Maybe.

Then I went from best friends with the guy I’ve been married to for 30 years to engaged in the span of a few seconds after what might have been a rhetorical question. He’s under orders not to tell me if it was. After all, he’s the fool who went on to say, “I do.” Just sayin’.

Still, in the first decade of the 21st century, I discovered a new “thing” in reality TV. The Bachelor. Though I tried watching it, I couldn’t after a while. It started out reasonably clean, but then it devolved into cat fights, spit-swapping sessions, and drama. Oh, the drama.

But one aspect intrigued me. The focused attention to finding the girl. What if Christians did that? What if we stopped playing the silly game of “pretend we’re not in this to see if you’re someone I could put up with for the next fifty or sixty years…”? Oh, man. What if the church rallied around its members and helped without pushing.

Trust me, you don’t want to push too much. You may discover that the people you’re pushing just get together and talk about it. Laugh at your antics. Mock the ridiculousness of it. Not that Kevin and I ever did that back in the day or anything. (Check out that story HERE.)

That “what if?” spurred an idea.

Sister churches. Chaperones. Not a couple of weeks in a giant house somewhere, but a whole month of real living with someone, day in. Day out. And again, with that chaperone to avoid that “appearance of evil” thing. If you could spend that much time with someone, seeing warts, virtues, best and worst sides… well, maybe you might just be right for each other.

At the least, you’d have a good idea if you even wanted to find out. That’s a healthier and quicker start than two or three months of a date here or there and hoping you’re seeing the real person. Right?

I created a character and ran with it. From giving him less than Hollywood good looks, to an anger problem and a blue-collar job, Adric had lots going for him… and not so much!

Then I tested it out. Acid test. I signed him up for eHarmony.

For the record, apparently short, prematurely graying mechanics with anger issues are a hot commodity. It took hours to get it set up, but man there were many women out there for him… supposedly.

And to this day, my Gmail email (that I never use) still says adricgarrison@gmail.com. No joke.

For what it’s worth, Adric learned one very difficult lesson that year.

As I’ve already confessed. I’ve never been on a blind date. I doubt anyone would even consider that I’ve been on a date. Still, after writing this book, I know for one thing. Blind Dates Are for Wimps.

Through the Fire Blogs, April 15

For Him and My Family, April 16

Among the Reads, April 18 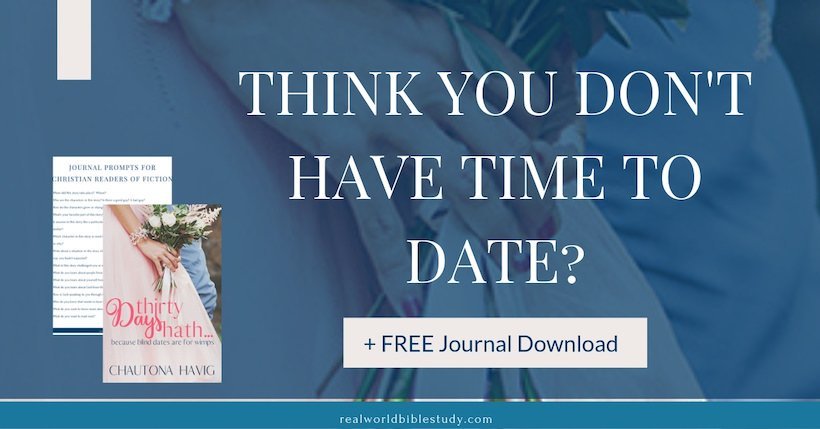 Previous Post: « What happens when you combine history with fiction?
Next Post: Have you met a protagonist with a mental illness? »