This post is part of “The Cafe Scholar’s Guide to Writing a Research Paper” series, which walks you through the process of writing awesome research papers step by step from start to finish. When you are done figuring out the difference between a primary source and a secondary source, be sure to check out the rest of the series!
Do you know what a primary source is?  If so, awesome! If not, you’re not alone.  When I was teaching a freshman class last semester, I realized many of my students didn’t know what I meant by “primary source” on their research papers.  This is really important for academic writing, so I thought I would give you a brief introduction to the difference between a primary source and a secondary source.

Disclosure: This page contains affiliate links. That just means that I may receive a small commission if you buy a product linked on this page.  It sure helps towards paying off those student loans! For more information, please see my disclosures page.

What a Primary Source Isn’t 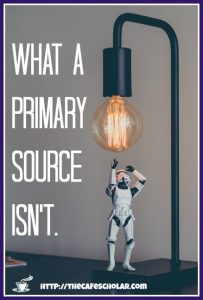 Some of my students thought that the primary source was the most important source in their paper or the source they were going to base most of their paper on, and the secondary sources were any other sources they planned to use.  That’s not what primary source or secondary source means, so I’m hoping this post will clear that up.  Whether a source is considered primary, secondary, or tertiary has nothing to do with how you will use it in your paper.  Instead, it has to do with how close that source is to the event or subject being studied.

What is a Primary Source?

What is a Secondary Source?

A secondary source is a source written by a scholar based on a study of the primary source(s).  Secondary sources are very important because we don’t do scholarship in a vacuum; we want to understand what someone else has learned from a source.  Also, they can help us learn from primary sources we might not have access to, and bring together information from several primary sources and tie it together.

What is a Tertiary Source?

Can the Same Source be a Primary Source and a Secondary Source? 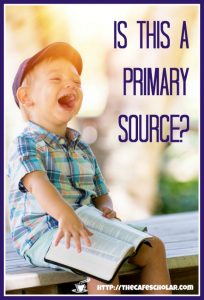 Yes, a source can be both primary and secondary, depending on the context, but not usually both at the same time.  It depends on how it is being used.  Here are a few examples:
Religious Studies: If you are writing a paper about the Gospel of John, a sermon on the Gospel of John from the 1950s is a secondary source; that sermon is talking about the primary source, which in this case would be the scripture itself. On the other hand, if you are writing a paper about religious views in the 1950s, a sermon from that time period would be a primary source, since it was written in a religious context during that time period for the purpose of teaching religion.
Literary History: If you are writing about Jane Austen, a review of one of her books might be a secondary source.  But if you are writing about how views of Jane Austen changed over time, that same review would be a primary source since it is a “real-time” depiction of someone’s view of Jane Austen. 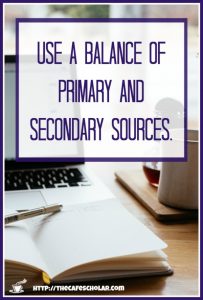 Write with a Balance of Primary Sources and Secondary Sources

I know I say this all the time (I think in every one of these research paper posts…), but when you are working on a research paper or project, you always want to check your professor’s requirements.  Some professors will require you to include a certain number or certain percentage of primary sources.  This will depend on the discipline and the level of the class.
Previous Post: « Productivity Secret: How to Set Up Your Desk
Next Post: Are YOU Brave Enough to try this Money Challenge? »