No little girl thinks “I want to be a prostitute when I grow up.”  We’d rather save the world. So how is it that between reading Love’s Rescue and watching a high school production of Les Miserables in the last two weeks, I “met” so many French prostitutes?  Both stories exposed the awful circumstances that bring women into that “profession.”  And once they are there, they’re stuck.  In survival mode.  In those days, even if you got “out,” no one would hire you legitimately, no one would marry you.  It was so powerful to see, side by side, two stories where these women experienced some level of compassion and grace (with very different outcomes!  Love’s Rescue has a much happier result than Les Mis).  And I loved the way that one of these women, least likely to save the world, gets to play the heroine.
This post was originally shared on the Real World Bible Study Blog.
This page contains affiliate links – they don’t cost you a penny, but they sure help to pay off those student loans!  For more information, please see my disclosure page.  Also, I received a review copy of this book. All opinions are my own. 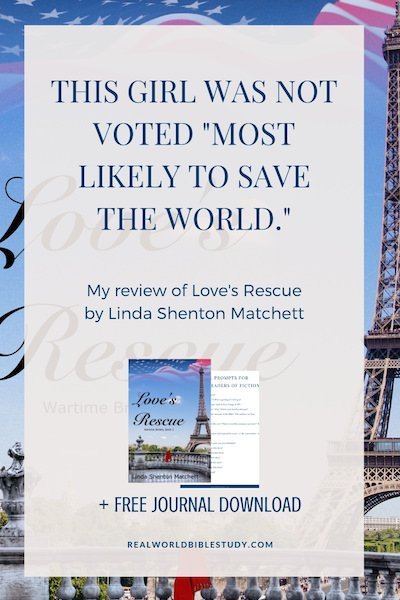 Love’s Rescue is the story of Rahab from the Bible (Joshua 4 & 6), set in the Second World War.  So I guess it was God’s idea to let the downtrodden prostitute save the world (or at least be a hero to a small part of it!).

Along with the Cold War, there are some of my favorites. And I really enjoyed this one too. The characters were engaging. I found myself tasting the bad coffee (and I don’t even like coffee!) in the army camp with Simon, and feeling the scorn Rolande felt by everyone in her life: her “customers,” her fellow Frenchman who viewed her as a collaborator, the German soldiers who viewed her as nothing, her contact with the Allies, who viewed her as trash, and even her own family.
I love the way that Simon acted like Christ. He acted the way all Christians should when he saw Rolande as she was. Precious gift, daughter of God, broken woman, beautiful in God’s eyes even though the world saw her as “a woman of ill repute.”  A hero soldier, sent in to prepare the way for Allied troops to liberate France.  But though he came to France to save the world, his greatest act is loving Rolande when the world despises her.
I love the forgiveness that we see in this story. I love Rolande’s courage. I love the way redemption played out.  And the Rahab theme was fun too.
The way the romance happens, with a few short meetings, not a lot of time to get to know you, fits very well with wartime brides, even though it feels strange to us. I do remember that the end felt very rushed. Everything resolved almost all at once, almost too fast. But other than that, I really enjoyed Love’s Rescue and would definitely recommend it.

Love’s Rescue is on tour with Celebrate Lit

A prostitute, a spy, and the liberation of Paris.

Sold by her parents to settle a debt, Rolande Bisset is forced into prostitution. Years later, shunned by her family and most of society, it’s the only way she knows how to subsist. When the Germans overrun Paris, she decides she’s had enough of evil men controlling her life and uses her wiles to obtain information for the Allied forces. Branded a collaborator, her life hangs in the balance. Then an American spy stumbles onto her doorstep. Is redemption within her grasp?

Simon Harlow is one of an elite corps of American soldiers. Regularly chosen for dangerous covert missions, he is tasked with infiltrating Paris to ascertain the Axis’s defenses. Nearly caught by German forces moments after arriving, he owes his life to the beautiful prostitute who claims she’s been waiting for the Allies to arrive. Her lifestyle goes against everything he believes in, but will she steal his heart during his quest to liberate her city?

Inspired by the biblical story of Rahab, Love’s Rescue is a tale of faith and hope during one of history’s darkest periods. 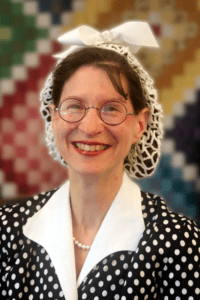 Linda Shenton Matchett is an author, speaker, and history geek. A native of Baltimore, Maryland, she was born a stone’s throw from Fort McHenry (of Star Spangled Banner fame) and has lived in historic places all her life. Linda is a member of ACFW, RWA, and Sisters in Crime. She is a volunteer docent and archivist at the Wright Museum of WWII and a trustee for her local public library.

Love’s Rescue is a modern retelling of the biblical book of Rahab. I set the story in Paris during the last weeks of the German occupation of France during WWII. While researching the book, I read numerous memoirs and interviews of folks who lived through the occupation. Two aspects discussed time and time again were rationing and the difficulty in getting food. People with any amount of land at all planted produce to supplement the meager supply in the shops. If they were fortunate and an egg was available, it would be fried to a runny consistency and poured over the top of the dish. 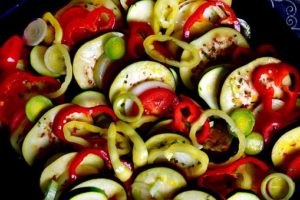 Here is a simple recipe for Ratatouille:

Reflections From My Bookshelves, April 19

For Him and my Family, April 24

Through the Fire Blogs, April 26 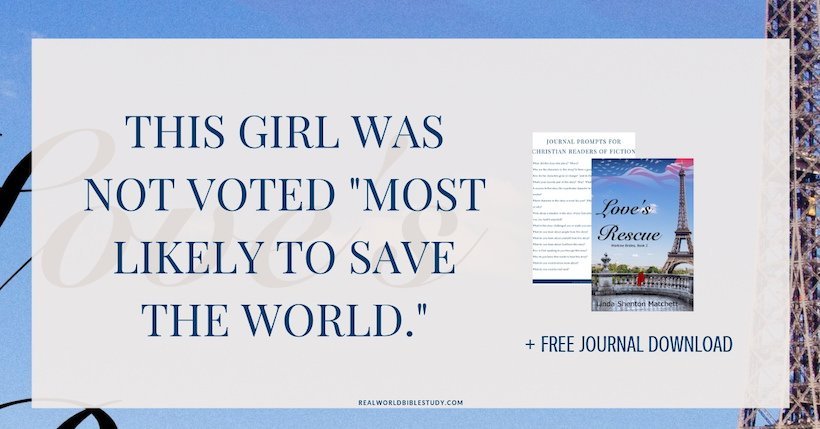 Previous Post: « Why I Loved Beauty in Hiding
Next Post: What will your teen learn from reading The Beloved? »