I have to admit – I was disappointed by the book I read this week.  Don’t freak out, Allison.  At first, when I picked up this book, I thought it was part of the same series as Finding Amor.  It isn’t – it was actually released before.  Guess I’ll have to wait for that one.  The only thing wrong with the book is that I was really hoping to see Emanuel and Ana in this book.  And I didn’t.  Vivir el Dream wasn’t about Ana and Emanuel…but it was just as gripping as Finding Amor.  Well, except that little boys like Emanuel wrap their fingers around my heart even more than college girls and down-on-their-luck dads.

This page contains affiliate links – they don’t cost you a penny, but they sure help to pay off those student loans!  For more information, please see my disclosure page.  Also, I received a review copy of this book. All opinions are my own.  Trust me – I have lots of them. 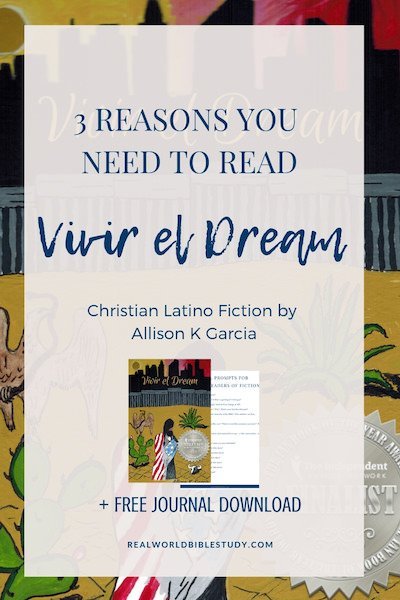 Why do you need to read Vivir el Dream?

You’ll be entertained, of course, but why do you need to read it?  Here are three reasons to start:

#1 Asking “What If?” Challenges our Faith 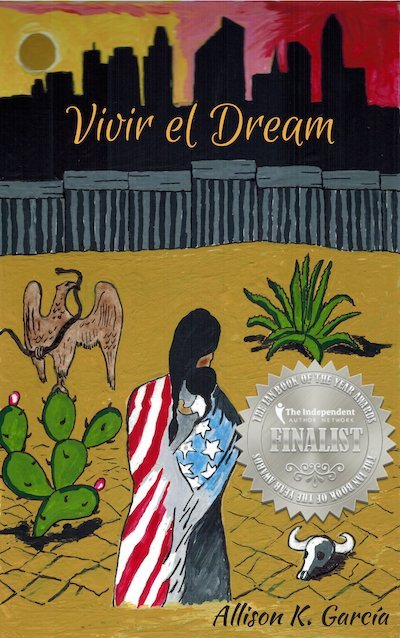 #2 Your heart will break.

Mine broke for someone who was supposed to be a bad guy.  Maybe who the “bad guy” is in your mind will be different from my “bad guy.”  Allison, for the record, I was really bummed about how things ended up with Tim.  (see, no spoilers).  My heart broke for him.  And your heart will break…for someone in this story.  You will feel the love and compassion God feels for people, regardless of their faith and beliefs, behaviors, prison record, immigration status…you name it.  God’s love is not conditional.  It doesn’t depend on who we are or what we have done. It depends only on who he is and what he has done!  When you read Vivir el Dream, you won’t just practice your Spanish (or your familiarity with the footnotes if Spanish isn’t your thing).  Your heart will break and you’ll feel God’s love as he looks at his kiddos in all shapes, sizes, and attitude problems.

Here’s something true.  Social Media, news media, and our polarized political environment…it is easy to forget that on every side of every issue, just like on every side of war, there are real people.  Real broken people.  That doesn’t always mean we should change our opinion – sometimes yes, sometimes no.  But we need to wear different glasses.  People glasses.  God’s-image glasses.  Glasses that see people the way that God sees them.  We need to wear those glasses all the time – when we go to work and when we come home, when we go to church or to the grocery store or the voting booth.  We especially need to wear those glasses as we talk in public or even in front of our kids.  Even if we disagree with a person’s viewpoint or even their decisions, can we have compassion for people?  For how they got there, even if we might have made different choices?  Can we be in fellowship with that crazy liberal or the ultra-conservative nutjob?  (Yes, there are nutjobs on every end of the spectrum!)  Can we figure out how to walk out our faith in these really messy situations where maybe there isn’t a black-and-white answer?

I say it all the time – the Bible is just as messy as our real world.  That’s because it’s a real-world Bible.  God did it that way on purpose.  Which means his truth can speak into the most divisive issues.  Sometimes, as we chase after God’s truth, we won’t always end up with the same opinions. (Maybe God did that on purpose too.)  But maybe we can end up with the same compassion for people, and the ability to stand beside those people in worship and in prayer, knowing that unity isn’t about being identical in thoughts or belief or even politics.  Unity is a choice.  Love is a choice.  What do you choose?

Vivir el Dream is on Tour with Celebrate Lit

The fates of an undocumented college student and her mother intertwine with a suicidal businessman’s. As circumstances worsen, will their faith carry them through or will their fears drag them down?

Linda Palacios crossed the border at age three with her mother, Juanita, to escape their traumatic life in Mexico and to pursue the American dream. Years later, Linda nears college graduation. With little hope for the future as an undocumented immigrant, Linda wonders where her life is going.

Tim Draker, a long-unemployed businessman, has wondered the same thing. Overcome with despair, he decides to take his own life. Before he can carry out his plan, he changes course when he finds a job as a mechanic. Embarrassed about working at a garage in the barrio, he lies to his wife in hopes of finding something better.

After Juanita’s coworker gets deported, she takes in her friend’s son, Hector, whom her daughter Linda can’t stand, While Juanita deals with nightmares of her traumatic past, she loses her job and decides to go into business for herself.

Will the three of them allow God to guide them through the challenges to come, or will they let their own desires and goals get in the way of His path?

Allison K. Garcia is a Licensed Professional Counselor, but she has wanted to be a writer ever since she could hold a pencil. She is a member of American Christian Fiction Writers, Shenandoah Valley Writers, Virginia Writers Club, and is Municipal Liaison for Shenandoah Valley NaNoWriMo.

Allison’s short story, “At Heart,” was published in the Winter 2013 edition of From the Depths literary magazine, along with her flash fiction. Her work, “You Shall Receive,” was published in GrayHaven Comics’s 2014 All Women’s anthology. Winning an honorary mention in the ACFW Virginia 2015 short story contest, “Just Another Navidad” was published in A bit of Christmas. Allison’s book, Vivir el Dream, published May 2017, has won several prestigious awards: 2016 ACFW Genesis Contest Finalist, 2018 Eric J. Hoffer Montaigne Medal Finalist, Honorary Mention in the 2018 Eric. J. Hoffer Awards E-book category, and 2018 IAN Book of the Year Awards Finalist in the Christian/Relgious Fiction category. Her highly-anticipated novel, Finding Amor, was released in September 2018.

Latina at heart, Allison has been featured in local newspapers for her connections in the Latino community in Harrisonburg, Virginia. A member of cultural competency committees for work and a participant in several pro-immigrant rallies and other events in her region, she also sings on the worship team and enjoys get-togethers with the hermanos in her church. With the help of her husband, Julio, and their son, Miguel, she has been able to nurture her love for the Latino people.

When I wrote my debut novel Vivir el Dream in 2012, I never imagined that it was going to win five awards, that I would be invited to churches and universities and NPR to speak about it, or that it would be taught on a college campus. That’s not why I wrote it. Sure, I hoped that people would read it and love it, but I never imagined the impact it would have and the book’s relevance seven years later.

There were two main reasons I wrote Vivir el Dream: authenticity and love.

They go hand-in-hand, but I shall tell you a little about how God sparked the story in my heart.

In 2011, we had three church members deported, and one of them was a dear friend—a good man who loves his family, greeted the congregation at the door, helped take the collection every Sunday and set up the tables and chairs for special programs. To see our friend, and hermano en Cristo, treated in a way that traumatized his children and nearly tore apart up his family, was something that broke my heart. But what broke it worse was seeing how the media spoke about undocumented people and sadder yet, having conversations with other Christians who spoke anger and hatred towards “illegals.”

God spoke to my heart about this. How could my brothers and sisters in Christ be so unkind and uncaring? Hadn’t they read The Good Samaritan? Didn’t they remember about loving our neighbors? It happened again and again, and I realized, with God’s help, that one of the challenges was that people didn’t understand the real story. They were fed a certain stereotype by the media, an image of a tattooed person in a gang or a drug dealer.

They hadn’t actually met anyone undocumented. Or at least they hadn’t realized they had.

In my life and in my job as a counselor, I had met tons of undocumented immigrants, and I had known them the great majority to be kind, hard-working people who wanted the best for their family and were willing to risk it all for the chance at the American dream. I saw love, I saw bravery, I saw strength, I saw faith. And I believe that God showed me those things so that I could reflect that in my novels.

A wonderful thing happens when we’re reading a book. We jump into the shoes of the main character. We understand their plight. Their hopes are our hopes. We feel their story, their dreams, their love, their anguish, their joy. That is one of the great things about reading. We escape our own lives for a while and experience a new adventure, gain a new understanding. We go places and meet people and do things we would never be able to in our own lives.

So that is what God placed on my heart to share with the world: an authentic experience of a mother and daughter who are undocumented Christians.

It’s controversial, but then so was the Gospel. What is more controversial than Jesus’ teachings? To love those who hate us. To turn the other cheek. To give away all possessions to join Him. I mean, what is more controversial than being asked to believe that a man born over 2,000 years was the Son of God and was risen from the dead after three days and that giving one’s heart over to Him will save one’s soul so as to live for all of eternity with God in Heaven?

And yet, that is the very heart of the Gospel.

To love God and to love others.

So, in the spirit of loving God and listening to Him, I wrote Vivir el Dream and published it even when the world pushed against it and continues to do so, perhaps more now than in 2012. All the more reason to love our neighbor more and to hold tighter onto God and His teachings.

I hope you enjoy my book. I hope it takes you on a new, heartwrenching adventure that carries you from the anguish in crossing a desert with your three-year-old daughter on your hip to the freedom in cooking tamales in the kitchen while swaying to cumbia, from the stabbing fear of living in a country that doesn’t want you to experiencing the joy of first love, and from the desperation of staring down an empty barrel to the understanding of truth for your fellow man. 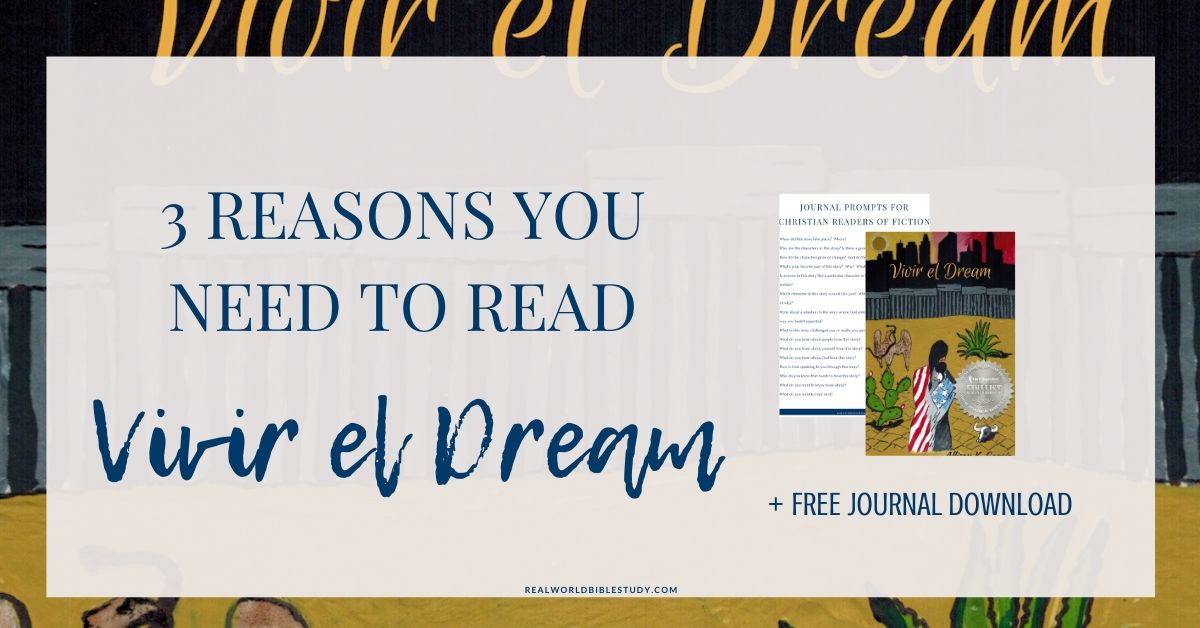 Previous Post: « Have you tried these 5 Simple Steps to Financial Freedom?
Next Post: What did I think of An Unpresentable Glory? »