I love that song. Who says you can’t go home?  Is it Rascal Flatts? I’ll have to google it when I’m done writing this post. It might have something to do with the first time I heard it. I had just moved home after college, and to be honest, it was a move I hadn’t planned to make. But in the space of a few weeks, I lost both of the part time jobs I was barely surviving with, and the church I worked for couldn’t afford to pay me. Mom and Dad said to come home…so I did. I’m really glad. It’s a different thing to get to know your parents as an adult, and I got to spend precious time with little bro while he was growing up.

This post was originally shared on the Real World Bible Study.

But what if you can’t go home?

That’s what it was like for Jessie when her family left town after her father was accused of conning half the town’s pensions. Everyone hated them. Even years later, her brother moved back into their old family home, and wound up dead. And when Jessie comes home to deal with her brother’s estate, it looks like she might wind up dead too.

It did sometimes have a little too much telling instead of showing. But I would recommend it and will be watching for this author in the future. As a suspense, it kept me on my toes, although there was a slight cheese factor in the internal dialogue. I didn’t guess whodunit, although I was close, and I do wish we got to know the bad guy a little more before the end. But my favorite thing about this book was the way Jessie felt like “my kind of people.” See, I’ve felt that “can’t go home” feeling before, if for different reasons. Felt like a failure, or even like I no longer had a place with my old friends. I’ve even felt the emotional disconnect of wanting to go home, but not knowing where that is.

But us? We can go home. It may not be the place where we grew up or the friends we thought would stick with us. Maybe it’s a warm feeling of knowing that God is in this place. For me, I felt this overwhelming sense of God’s presence when I moved into my apartment last year. Sanctuary. Home is about sanctuary, and reconciled relationships, and maybe new ones too. Home is about second chances and fresh starts, and hope. Hopefully your homecoming isn’t fatal! But maybe there’s a fresh start for you there too.

Fatal Homecoming is on tour with Celebrate Lit.

It was murder. She was sure. And that assurance could cost her life.

Undercover RCMP officer Rick Chandler poses as a detective in the small town of Chenaniah River. He is investigating the possibility of a corrupt police force when Jessie returns to bury her brother, and she refuses to believe evidence that point to her deceased brother’s involvement in drug trafficking. Soon, the same person that murdered her brother targets her. Can Rick help Jessie dodge bullets, escape fires, and exonerate her brother before the attacks escalate?

Jessie Berns has returned to her hometown to find answers about her brother’s suspicious death. With the help of an old friend, Detective Rick Chandler, they pursue a truth that someone is willing to do anything to keep hidden—even kill again. They uncover decades-old secrets that expose hidden sins and threaten the lifestyles of high-powered people in their small town.

As they close in on the devious mastermind manipulating the community, it becomes frighteningly clear to Rick that Jessie is not the one calling the shots in her amateur investigation. She is the killer’s new target.

Stacey Weeks: My primary ministry in life crowds around my dining room table like a ravenous herd every night. My husband and children are both my greatest blessing and greatest ministry opportunity. Caring for them is a privilege bestowed upon me as wife and mother.

I believe God simultaneously called Kevin and me into ministry. Kevin’s calling was clear – he is a pastor. I, on the other hand, took years to recognize the specific areas in which I was equipped and called serve. I believe that God has called me to meet Kevin’s needs, to meet the needs of our children, and to serve Him personally.

A Pile of Stones

Often, the things I am studying in the bible make their way into my novels. At the time of writing Fatal Homecoming, I was reading the book of Joshua.

In Joshua chapter four, Joshua describes the pile of stones the Israelites built as a memorial to God. Those stones were evidence of the Lord’s provision for them. The monument was a reminder to future generations that God had delivered his people.

In Fatal Homecoming, Jessie needs to remember God’s provision. She wears a unique pendant passed down through the women of her family. Her necklace is comprised of river stones that represent the rocks from Joshua. They are to remind that God always meets His children in their moment of need. 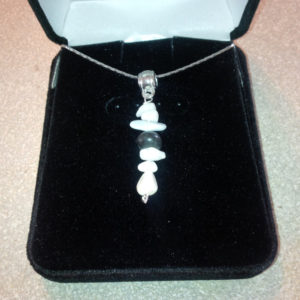 Shortly after writing this necklace into Fatal Homecoming crisis struck a good friend of mine. As our church gathered around a suffering family to love and support them in their time of need, I decided to make a real pendant of stones to give to my friend to remind her and to remind me that God meets every need in His time and in His way.

The pendant of stones can be strung on a necklace or keychain. It is more than words on paper and more than a pile of rocks strung on a string. It was a reference point. They mark where God gave me a story to share so that others may know and believe.

If you are the lucky winner of this pendant of stones, I pray that every time you look at it, touch it, and feel the weight of it around your neck that you will remember to believe that your God is good. Always.

Stacey has also gifted all the blog readers with a short story to download. Enjoy!

Through the Fire Blogs, February 20

As He Leads is Joy, February 23

Spoken from the Heart, February 24

Previous Post: « How can God heal your broken family?
Next Post: Do you need to take back your life (and your sanity)? »